Biologists’ observations of recently discovered microorganisms have shown how multicellular animals could have arisen during evolution. These organisms are similar to predatory sperm and prey on larger victims, sticking together into “multicellular” pseudo-organisms. The study was supported by a grant from the Russian Science Foundation (RSF). 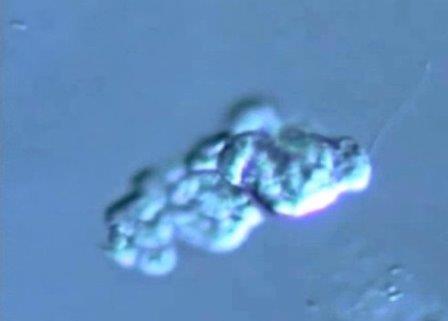 There are different theories of the emergence of multicellularity. The generally accepted theory is that of Ernst Haeckel’s gastrea that the primary multicellular organism could have arisen in the process of cell division. Differences appeared in the clusters of such cells, which led to further specialization so that some cells were responsible for movement, while others – for nutrition and digestion. Perhaps the ancestors of multicellular animals could be unicellular organisms that move with the flagellum on the back and look like carnivorous sperm. Moreover, they were able to hunt for larger unicellular. This is possible due to joint hunting and nutrition, in which cells partially stick together with each other in multicellular formations and form the so-called aggregations. Such a way of life contributed to an increase in the size of cells in the composition of aggregation, as well as to the fact that the latter now grew not due to the addition of new “members”, but due to the division of existing ones. Eating a large victim, in turn, led to a significant increase in size and subsequent multiple cell division, which is an important factor in the emergence of multicellularity.

New unicellular predators from an extensive group of posterior flagellates, namely, three species of Syssomonas multiformis, Pigoraptor vietnamica and Pigoraptor chileana, were discovered by a group of scientists of the I.D. Papanin Institute of Inland Water Biology of the Russian Academy of Sciences in fresh water bodies of Vietnam and Chile. Observation of their living cells was carried out in laboratory conditions. The studied species could survive at a temperature of 5–40 ° C, acidity of the medium 6–11 (that is, in a rather alkaline environment) and tolerate an increase in salinity up to 0.04%. As a result of research, it turned out that these microorganisms have complex life cycles, the formation of multicellular clusters, and an unusual diet for modern single-celled ones – eating large prey due to partial adhesion to each other. Syssomonas multiformis, moreover, could destroy rice grains and ingest individual particles of rice starch due to the so-called extracellular digestion, in which starch-breaking enzymes are released directly into the water.